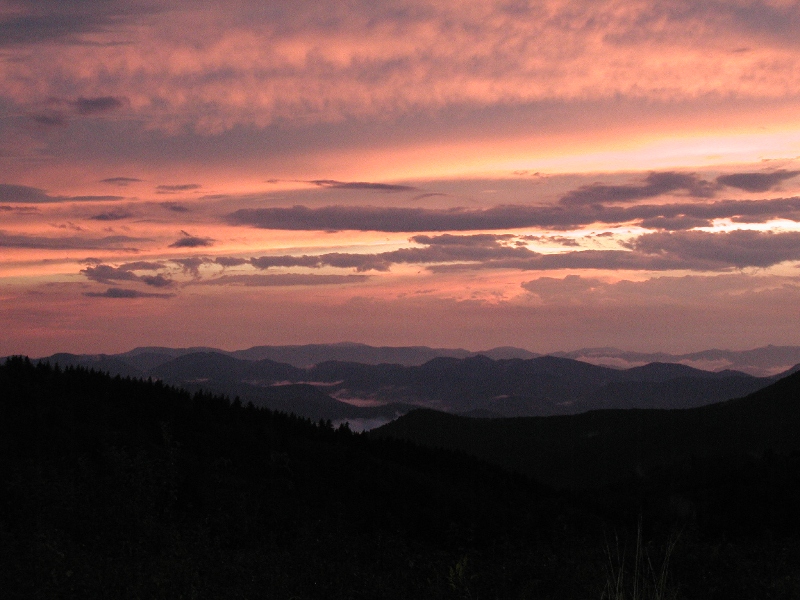 In September 2003, we had an eventful trip to the Middle Prong Wilderness.  We hiked in to a bald and pitched camp.  Tracy left her backpack at the camp, and then we kept on hiking down the trail.  After about 30 minutes, it started pouring down rain (as always in the Middle Prong…), so we decided to head back to the camp.  An hour later, I couldn’t figure out where we had gone wrong, as we were still trying to find the camp.  The rain was torrential and it was starting to lightning…and we were on top of clear mountains.  Now, I had marked the trailhead in my GPS when we started hiking, but I hadn’t marked the camp site.  Yeah, I know…  Now, I had looked at my paper map while at the camp site, so I knew where we had camped on that map.  However, I couldn’t pull out that map now because it was raining too hard and we didn’t have any shelter.  It also wouldn’t have helped, because the cloud cover was actually below us, so I couldn’t see any mountains to use as landmarks to get my bearings with the compass.  I had the GPS, but it only told me where the car was…and it was on the other side of a river valley that was 2500 feet of elevation down, and 2500 feet of elevation straight back up again.  Well, I really felt that I knew where camp was…after all, I have a great sense of direction.  So we kept hiking in the direction I thought we needed to go.

After another 30 minutes, the lightning was getting worse, it was still pouring rain, it was getting cold, and we only had 40 minutes of daylight…I was getting worried.  We had enough dry stuff for one of us to make it through the night without hypothermia…I was pretty sure.  However, there were two of us…I was getting worried.  So I sat down with my GPS and decided to try my luck with finding the camp on the GPS topo map.  With lightning dancing literally all around me, I found the trailhead on the GPS, and then I found the creek we had crossed, and then I found the ridge I thought we had climbed, and then I found the spur I thought we had camped on (of course, the trail wasn’t mapped).  So I guessed.  I made my best guess, and marked that point, and told the GPS to take me there.  I expected the arrow to point forward and say that I was 100 yards short of the camp.  Instead, the arrow pointed behind me, and said I was 1 mile away from the camp.  I decided to trust my map reading skills over my sense of direction, and I followed the GPS.

We pretty much ran because we had a mile to cover in 40 minutes before dark, assuming the GPS was right.  When the GPS beeped and said I had arrived at the spot, I looked up, and the tent was 30 feet ahead of me.  Man, that was close.  We made it with 15 minutes of daylight.  But we did make it.  If we hadn’t made it, I was going to try for the car.  It would have been really tough in the dark, though, and I knew the smart thing to do was to get off the mountain and dry to build shelter for the night.  But, man, that was a scary option.  But after all that backpacking in the Colorado Rockies, and the closest I ever came to getting bad lost was in North Carolina.  The next morning I found the side trail that I had missed the day before that had sent me in a circle.  And I also learned to ALWAYS mark the camp site along with the trailhead.  On the plus side, the rain let up when we got back to camp, and God gave us a nice double rainbow and a great sunset for our troubles! 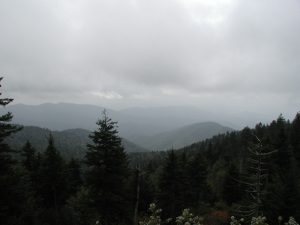 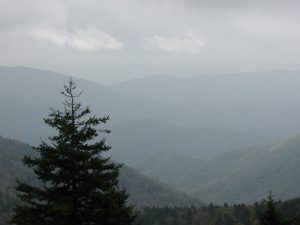 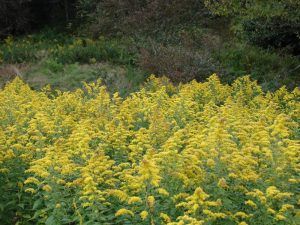 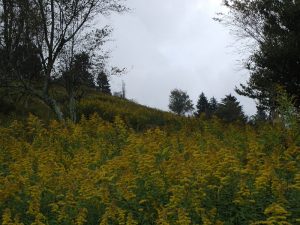 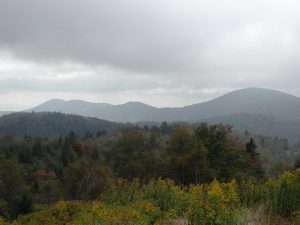 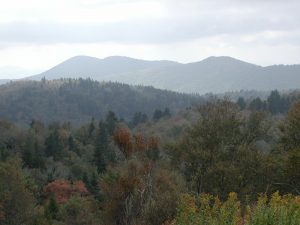 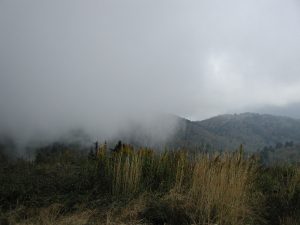 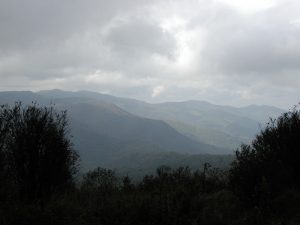 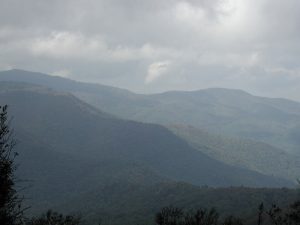 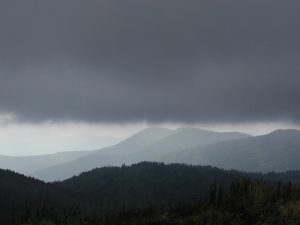 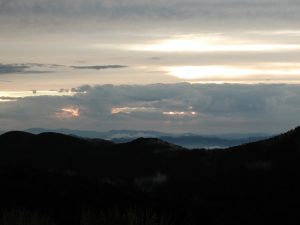 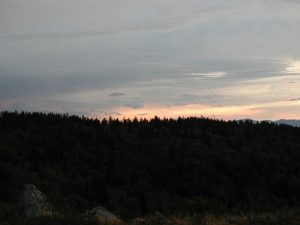 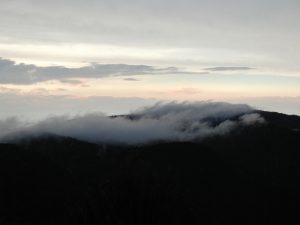 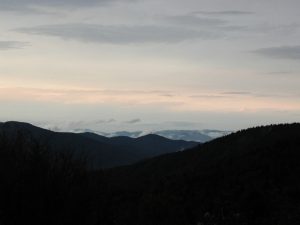 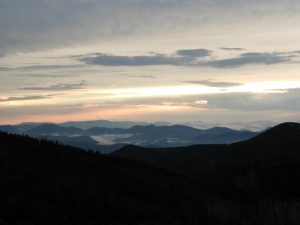 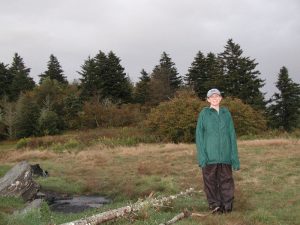 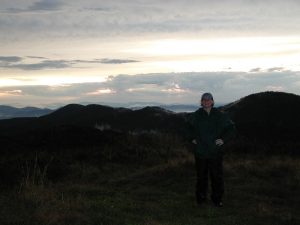 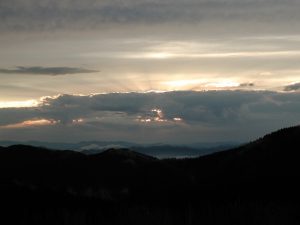 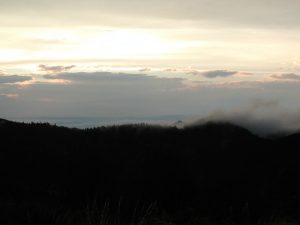 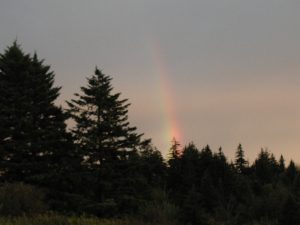 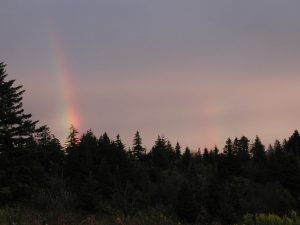 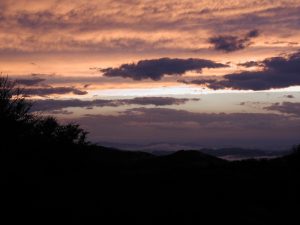 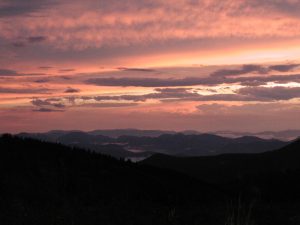 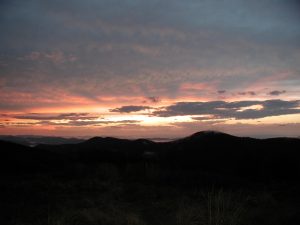 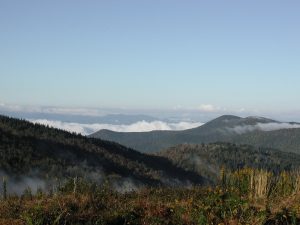 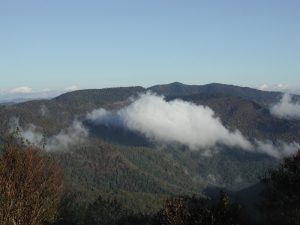