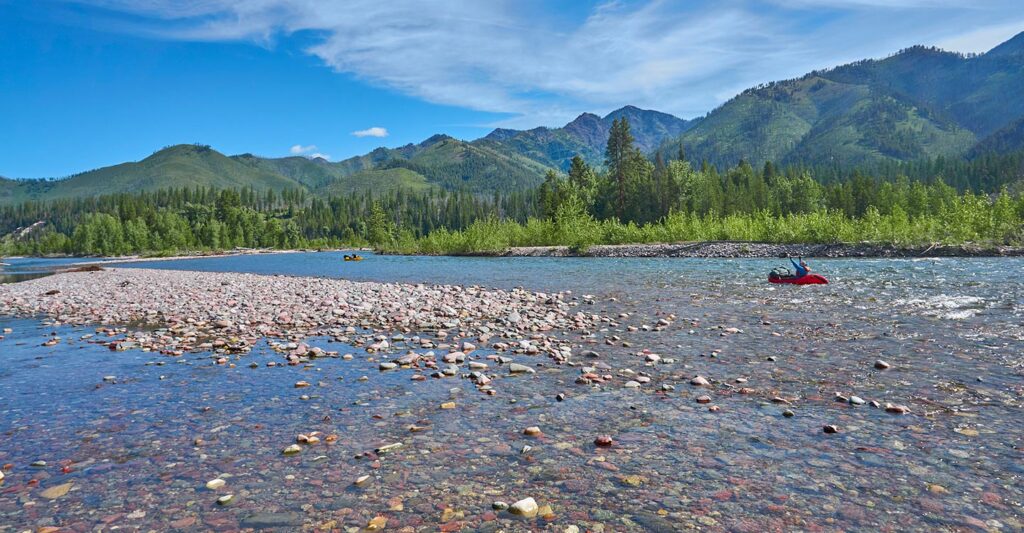 After our packrafting trip in 2017 to the Brooks Range of northern Alaska, I knew that I wanted to use these packrafts to explore more of the deep backcountry. We used Kokopelli packrafts in Alaska, but I decided that if we were going to do this type of activity more often, then I wanted something lighter and more packable. So we bought two Alpacka packrafts and started researching our next trip.

It didn’t take long to realize that our first stop had to be the South Fork of the Flathead River in the Bob Marshall Wilderness of northern Montana.

There are other areas, such as the Frank Church, the Grand Canyon, the Snake River, and the Escalante River, but I wanted solitude and mountains, and I wanted to hold off on another Alaska trip for a few more years, so that made The Bob the logical choice.

Of course, as soon as I mentioned my idea to Layne, he was on board. So, Tracy, Layne, and I began planning a 10 day trip into the Bob Marshall. The plan that I landed on essentially started from the Benchmark Trailhead outside of Augusta, MT, on June 22, 2019. On day one, we hiked southwest along the South Fork of the Sun River, and made our first camp just a couple of miles from the trailhead. And on day two, we headed over Stadler Pass, and ultimately to Danaher Creek.

Along the way, we saw lots of grizzly and wolf tracks, as well as lots of nice, fresh grizzly scat. I had read that The Bob has a large concentration of grizzlies, and the tracks and scat we were seeing certainly supported that. We also had a couple of nice campsites, including a beautiful site in the meadows near Basin Creek Guard Station.

We got on the water at Danaher Creek, about five miles up river from the South Fork of the Flathead on day three. There was lots of water on Danaher, and we were excited to begin the paddle. Of course, we went about 200 yards, rounded a bend in the creek, and ran right into a major logjam. After portaging this logjam, we continued downstream. We had to portage two logjams along Danaher, and a couple of nasty strainers, but the paddling was fun and easy.

After about three hours on Danaher, we met the confluence with Youngs Creek, and now we were on the South Fork of the Flathead River. The river was mostly easy class I this day, and we just enjoyed the float. We found a campsite in a meadow above the river late in the evening.

We got up on day four and continued down the Flathead. In the morning, the river continued to be easy class I water. We stopped for lunch at the Big Praire bridge, and when we got back on the water, the river’s personality completely changed. We entered the Fast Corner’s section of the river, and we had Class II rapids for nearly an entire four hours.

At one point during these rapids, Layne entered a tight turn in the river with a strong rapid that led straight into a jam of trees. Layne hit the trees and flipped. His paddle became stuck in a tree under the water, and was just flapping in the river with one blade sticking straight up out of the water. Luckily for Layne and his paddle, Tracy also hit the logs and flipped, but she dislodged Layne’s paddle when she hit it. I was in the back, and decided it didn’t look fun to be swimming, and I was able to negotiate through multiple obstacles in the tight bends. Layne and Tracy had to swim for about a hundred yards before there was a place to get out of the river.

They were both cold and wet, and the clouds refused to let the sun come out, but other than losing a hat and a pack cover, they were mostly intact. After warming up, we paddled another couple of miles and camped near the confluence with the White River.

Day five was pretty easy paddling, with some interesting boulders sprinkled in to the mix. We paddled all day down to the bridge at Black Bear Guard Station, and exited the river in the late afternoon. We camped at the take-out, and had a couple of good thunderstorms rage through the mountains.

From here we had nearly 50 miles to hike, and six days to hike it, so we were in no hurry. Day six involved a long, long ascent up Helen Creek to Pagoda Mountain. The trail down low was tangled in brush, so we were soaked from the wet bushes over the trail. When the trail finally broke free from the trees, the sun finally escaped the clouds, and then it got hot. The final two miles up to Pagoda Mountain gained about 2,000 feet of elevation, but it wasn’t a terrible climb. The entire climb up to Pagoda was a long slog, but it never seemed too difficult.

But the slog was worth the effort. The views from the side of Pagoda Mountain were incredible. We could see west towards the Flathead that we had floated the day before, with high, snow-capped mountains rising in the distance.

But storm clouds were lurking on the horizon, so we rushed the final mile along the ridge to start the descent off the mountain. Along the way, we saw lots of grizzly tracks, including one grizzly track that could have made a convincing argument for Sasquatch.

The descent was muddy, and eventually the storm hit, with a heavy hail storm as we rushed to get below tree line. The storm quickly moved through, and we were treated with a nice rainbow.

The descent seemed to take forever. We thought it would take less than two hours to get to the valley at the bottom of Pagoda Mountain…it ended up taking over three hours. The trail was fine, but it had a lot of switchbacks that extended the length of the hike.

Once at the bottom, near the headwaters of the White River, the woods were like a rain forest. The trees were thick, the forest was quiet, and it was really wet. It was getting late, and we rushed to find a campsite, and ended up settling on the flattest spot we could find. We got water out of a beaver pond and hoped for the best. It wasn’t an ideal night, but we survived.

The first half of day seven was spent drying gear. Once everything was mostly dry, we made a short, easy hike along the headwaters of the White River to the base of the climb up to Larch Hill. It was just a 4.5 mile day, along the flat valley, with a couple of river crossings.

Day eight was a tough day. We knew we had a steep climb up to the top of the Chinese Wall at Larch Hill Pass. What we didn’t know was that a fire had ravaged this mountain the previous Fall, and the trail was completely clogged with downed trees. There was a trail crew working on the trail, but we passed them within the first 20 minutes. The next three hours were spent battling the trees and being careful not to break anything important.

Tracy was stumbling around on rims by the end of the day, so we found a campsite and called it a night.

Day nine was a much easier day. After a short ascent near Cliff Mountain, the trail was either downhill or flat for the rest of the day. The trail was often covered in pine needles, making for a comfortable walk. Because the trail was so easy, though, we ended up walking about 14 miles.

Layne had lots of portaging around log jams, and then he ran into a nasty logjam at the confluence that required lots of misery to exit. He then hiked the remaining 4 miles back to the trailhead.

Tracy and I had an uneventful, relaxing hike back to the trailhead.

We arrived about an hour and a half before Layne made it, so we spent that time drying gear and tending to Tracy’s mangled feet.

After 10 days in the backcountry, we were once again overwhelmed by the crowds of people at and near the trailhead. But it was the week of July 4th, and there were large groups of outfitters all over the place. The illusion of the wilderness was shattered.

But this was another phenomenal trip. For the first seven days, we only saw one guy on the trail, four guys on the river, and five Forest Service employees. You absolutely cannot beat that kind of solitude. We saw over a dozen grizzly tracks and over a dozen wolf tracks…but we didn’t see a single large mammal other than deer and one elk.

The Bob is much more forested and at a much lower elevation than other parts of the Rockies, but there are many secret gems hidden within this huge wilderness, and there are countless hiking options. I can’t wait to explore more of the Bob Marshall Wilderness.