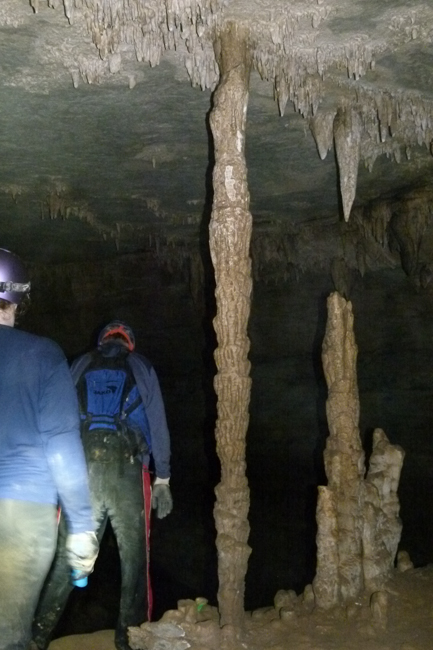 On April 4, 2015, my wife, a couple of friends, and I went to Tumbling Rock Cave in Jackson County, Alabama. Jackson County has the distinction of having the highest number of caves of any county in the country. And from what I have seen so far, they are some nice caves. Tumbling Rock is owned and managed by an organization called the Southeastern Cave Conservancy, which is a non-profit group that buys caves in order to protect them. Tumbling Rock is, so far, the best non-commercial or non-public cave that I have ever visited.

This was the second time I had been to this cave since moving here last year, but the first time without someone to guide me. With over 6 miles of surveyed passages, Tumbling Rock is a very long cave. It also has several areas of rock breakdowns as well as multiple intersecting passages, making it a reasonably difficult cave to navigate. But it has some great formations and I want to start learning it better. So off we went.

The best parts about this cave are its length, its intersecting passages, the Topless Dome, and its great formations.

On the way in we mostly just took a direct bath towards the back of the cave.  We checked out an old salt peter mine, some very nice stalagmite, stalactite, and column formations, and some very large columns called the Elephant’s Feet.  After about two and a half hours we arrived at the Christmas Tree formation.  The large stalagmite is shaped like a Christmas tree and is decorated with battery-powered lights during December.

From the Christmas Tree we decided to press on to the Inner Sanctum.  To reach this room we needed to crawl through the Suicide Passage.  The route is a tight crawl through a rock fall, but it’s not as tough as the name suggests.  Once through, we climbed up into the Inner Sanctum which required some vertical climbing over some slick boulders, but we made it up without any problems.  The Inner Sanctum is a large room with a nice waterfall.

That was the end of our trip for the day so we headed back out.  On our way out we stopped off at the Topless Dome which is an incredible room. You have to climb up through a waterfall in a hole in the roof of the cave and then walk a few yards to a room that’s shaped like a missile silo, is 396 feet tall, and has water raining down from the top. This room is really nice.

From there we just continued out of the cave. We got a little turned around in an area known as the Wildcat Rock Pile (well, we THINK this is where we got turned around). But after a few minutes of combing the rock pile we eventually decided on the correct way out and luckily we were right. All in all, we were in the cave for about 6 hours, and came out wet, muddy, sore, and wanting more.

This is an outstanding cave. Its length and its intersecting passages make it challenging for a newbie to navigate, but it also makes me want to go back over and over again until I figure it out. 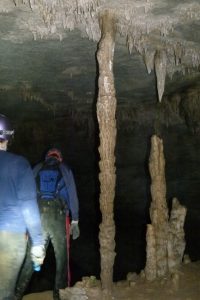 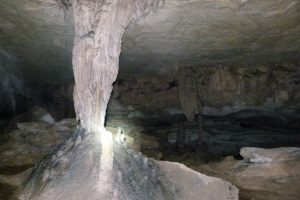 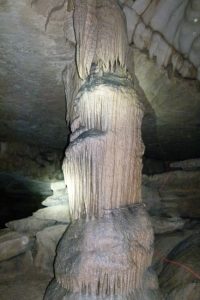 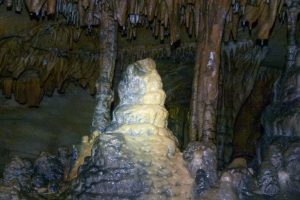 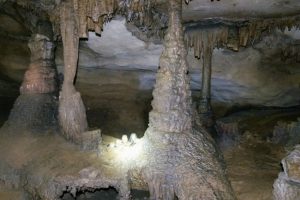