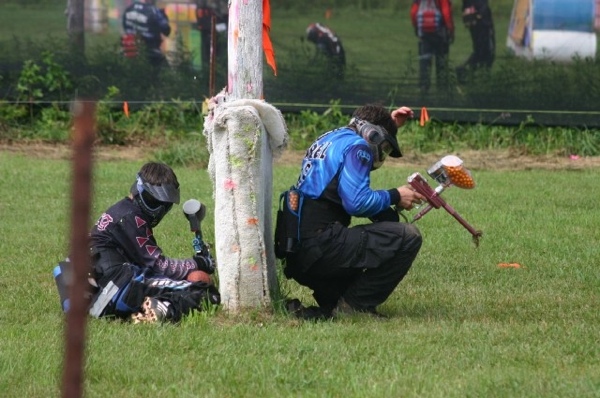 These are just a few videos we’ve shot over the years of our paintball games.

This video is several games from when we played in May 2012. This video was shot with the helmet camera by several different people.

This video is several games from when we played in November 2011. This video was shot with a handheld camera.

And here’s a video of several games we played in November 2011 shot with my helmet camera.

This an HD clip posted of a game in July 2011. And, don’t worry, I didn’t shoot the girl when I bunkered her!

Here’s an HD helmet cam view of the same game as above.

Here’s an HD helmet cam view of another game. I think I made way too many hopper shots this day.

Here’s another HD clip of a game in July 2011. Be sure to change the resolution to HD. I got eliminated pretty quickly in this game.

These videos are so old that the quality makes you wonder how we ever survived before HD.

These are short clips from several tournament games we played in 2004.

This is a short clip of action shots from our Rec games on the speed ball field. Enjoy watching Benjy get lit up!

This is another short clip of action shots from our Rec games in 2004. Enjoy watching Chris roll around on the field, and don’t make too much fun of Larry’s gutsy run. Also, notice when Gary tries to make a run across the field. He has a bad yard sale crash, and then to add insult to injury, you can see a paintball break on his back.

This is just some people getting shot! You can see a ball break on Larry’s right hand, then you see Scott get absolutely lit up (try to see ALL the paintballs flying at him), and then you see a ball make a really nice bust on Tim’s head.

Here’s a clip of Larry and Benjy eliminating the last guy on the speedball field. Larry moves up and covers Benjy, while Benjy charges the guy and eliminates him.

This is a clip showing Benjy and me taking out the last two guys on the speedball field. I charge one of them and eliminate him, and then Benjy charges the last one and makes him surrender.