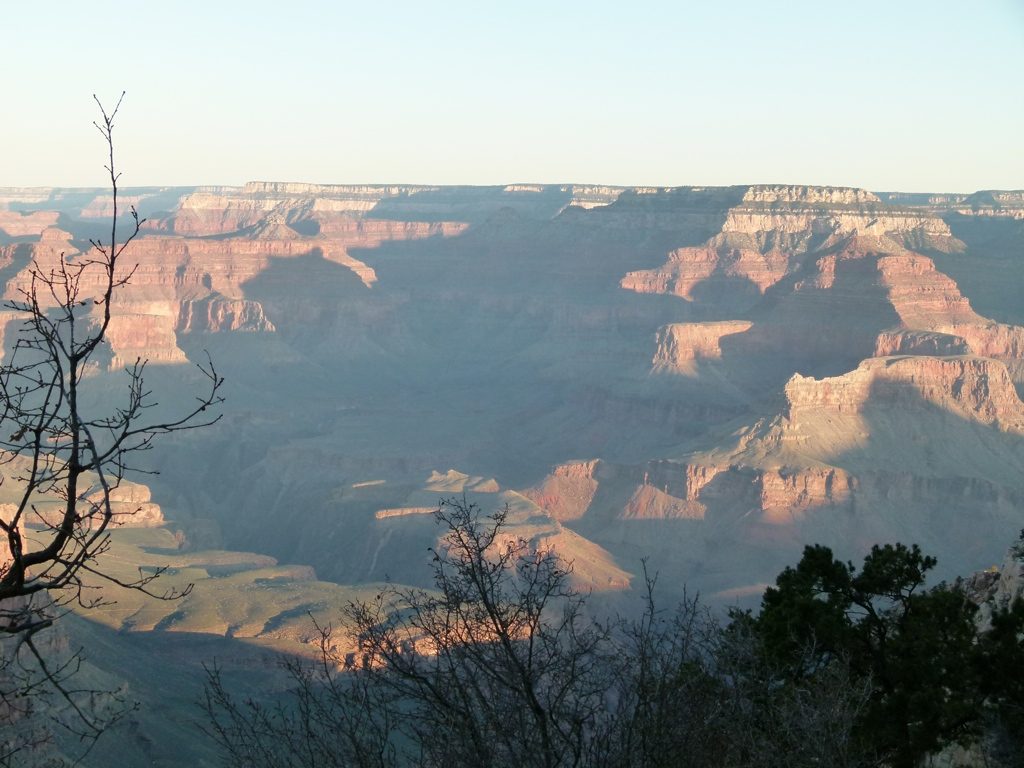 The weekend of April 1, 2011, Tracy and I made a trip out to the Grand Canyon to finally backpack down to the bottom. We took half a day off from work on Thursday to drive to the hotel outside the park, and then we started the hike at dawn on Friday. We had to park at the backcountry office and take a bus to the trailhead, but there were only a dozen or so people on the 6 am bus with us, so it didn’t look like it would be too crowded. We waited at the trailhead to let others get ahead of us, and then we started down the steep descent at the South Kaibab Trail.

The first part of the morning was pretty nice, but it was already warm at 6:30. By about halfway, it was starting to get good and hot. We didn’t really see many people at all, and we didn’t start running into people going the other direction until about 3/4 of the way down. The hike down was really pretty, especially in the early morning sunrise. We made it to the bottom around 12 or 12:30, and then we just had the rest of the day to mess around at the river. We quickly found a campsite at the Bright Angel Campground. There were already quite a few people in the campground, but we got a nice spot with some shade towards the back. After setting up camp, we napped a little, and then walked a few minutes up the North Kaibab Trail around Phantom Ranch. Tracy joked about going into Phantom Ranch to get something cold to drink, and it wasn’t until later that we saw a menu on the campground sign, and realized that we could have gone to get something cold to drink. We also walked a little down by the river, but it was so hot by then, that we mostly just stayed in camp and read. I didn’t realize I had been so thirsty, but I drank over 70 ounces of water AFTER we got to the bottom. It’s nice that they have clean water at the bottom…I was guzzling it.

The night was uneventful, but we got up again before dawn to start the tough ascent back up to the top. As hot as it was getting in the afternoon, I wanted to be up as early as possible. One other couple left just behind us, but we let them pass early on, so we had the trail to ourselves. We started up the Bright Angel Trail to finish up the loop, and we hiked in the dark for about the first 45 minutes, until the trail cut away from the river to head up canyon. We really moved along pretty good for the first part of the hike up, and I think we may have pushed it harder than we needed to. We passed the other two guys that started early after a couple of hours, and then we just pressed on until Indian Garden.

We made it to Indian Garden around 10:30, I think, and then we started running into people. The hike had really not been terribly crowded at all the past couple of days, but once above Indian Garden it started getting bad. We passed a lot of people coming down, and it was amazing how unprepared they seemed. The Park Service really tries to beat it into your head that the Canyon is a dangerous, hot, dry place to be, but we were passing terribly out of shape people who were already two miles down the trail, with virtually no water. And I was starting to feel the heat. I was wondering how in the world they were going to make it back up, even if they turned around right where they were. But we kept on moving up, and I did well until about the last half mile. About the last half mile from the top, I started to overheat, and I was starting to feel sick at my stomach. By then, it was close to 1 pm, it was hot, and the trail got really steep. I think I hadn’t drank enough water, or eaten enough food, and I know I hadn’t drank enough electrolytes. But I wasn’t feeling too awful badly, so we pressed on and made it to the top. Once at the top, we had to figure out how to make it back to the backcountry office. We started to walk it, but decided it was too far and we were too tired, so we caught the park shuttle. I had really been holding out on eating lunch because I wanted a big hamburger. So we went and got a hamburger, but I couldn’t eat it. My stomach was feeling too bad, and I just couldn’t get it down. So we went and bought some Gatorade, and I downed an entire bottle in 3 minutes. And I instantly felt better. I really needed those electrolytes.

After leaving the park, we drove back to Cliff Dwellers, AZ, on Hwy 89A. We had driven through here on Thursday, and I thought it just looked like a nice little place to spend the night. When we got out of the car, Tracy and I could literally barely move. We just stared at the 6 inch step leading up to our hotel room like it was a 100 foot insurmountable cliff. We were terribly sore. Cliff Dwellers just has one small lodge, a gas station, and a cafe. We walked around a little…very slowly…ate at the cafe, and went to bed early. We got up on Sunday and hiked around a little on Forest Service Roads in the Kaibab National Forest near Jacob Lake before it got cold and started to rain. I really liked walking on those roads up there, though. The forest is open and flat, so it’s just a pleasant place to walk around. Jacob Lake also had a hotel that was open, and it looked like it would have been nice to stay there, too.

Lesson learned from this trip: when the Park tells you to drink electrolytes, listen to them. We had taken some Gatorade with us, but it just wasn’t enough. We should have taken more Gatorade and less water. This was a great trip, and the Grand Canyon is definitely a must-do hike. However, like many of the other Life Trips we’ve done recently, it’s one we are glad to do just once. It was very pretty, and it was very tough. Electrolytes are a must-have on that trail, and early starts are also essential. The Kaibab Forest is also a nice place to camp and hike. 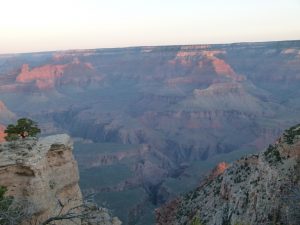 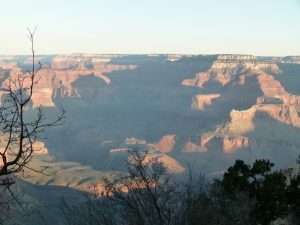 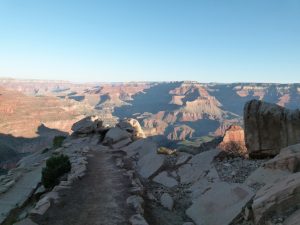 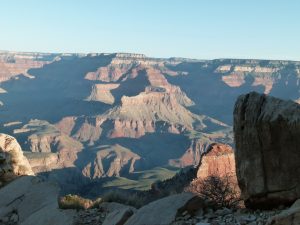 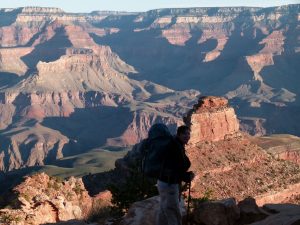 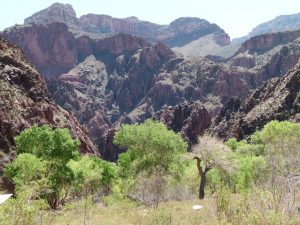 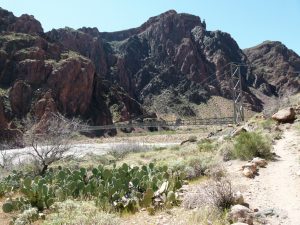 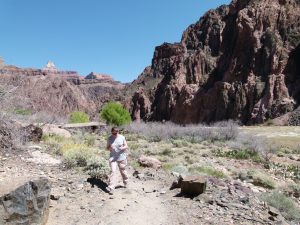 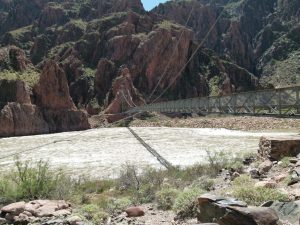 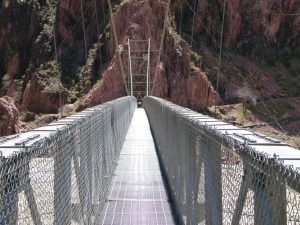 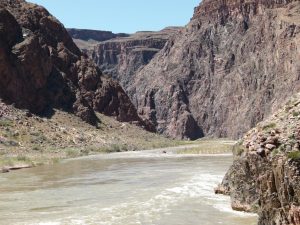 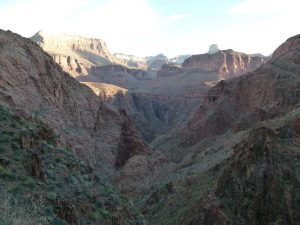 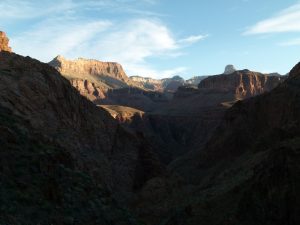 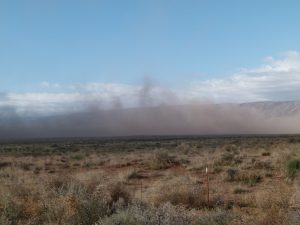