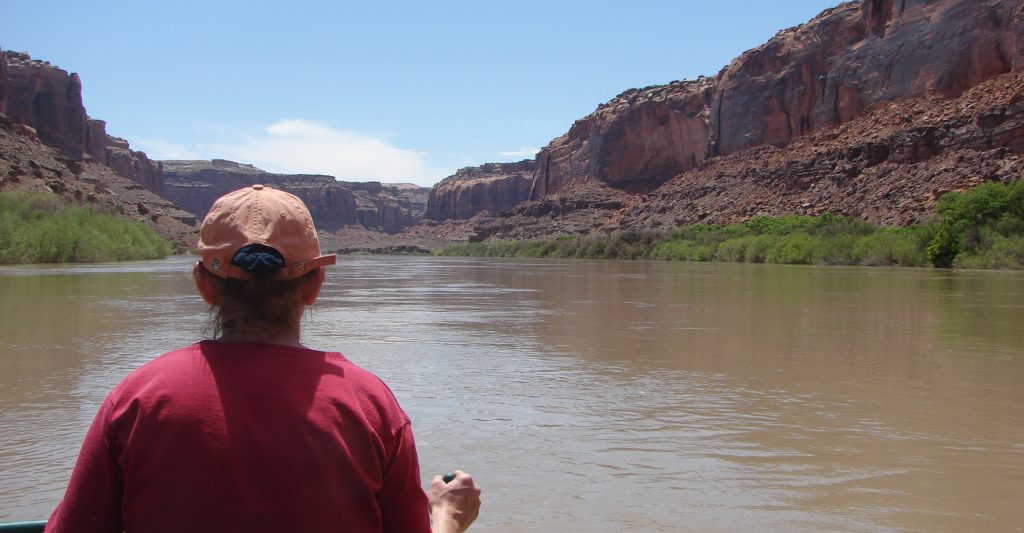 Tracy and I took a long weekend on 12 May 11 to paddle the Green River through Labyrinth Canyon in Utah.  I had been trying to do this trip for several years, but there was always something that stopped us.  One year I tried to do it over Memorial Day, only to find out that there is a motor boat festival on the river that weekend.  Then I tried to do it last Thanksgiving, only to be told the water level was too low to be enjoyable.  So I finally managed to get it scheduled for a time that would work out.  This trip required a lot of planning, though.  First off, BLM and Utah have all kinds of boating rules.  We had to have a free permit, and we had to leave one copy at the put-in, and keep one copy with us; we had to carry a fire-pan whether we planned to build a fire or not; we had to carry a toilet system with us; we had to have a spare paddle for a boat under 16 feet, and a spare paddle and a throw rope for a boat over 16 feet.  Then we had the big obstacle of figuring out the shuttle.  We had to either put-in at Green River State Park or 20 river miles below the park at Ruby Ranch.  Then we had to take-out at Mineral Bottom, 45 river miles from Ruby Ranch, and about an hour and a half drive from Ruby Ranch or Green River.  Also, Mineral Bottom is at the bottom of a very steep road that I didn’t (and still don’t) think Tracy’s car could make it back up.  So we figured we could put in at Ruby Ranch, dropping our gear off, and then driving the truck to Mineral Bottom.  But how to get back to Ruby Ranch since we couldn’t drive Tracy’s car?  I checked car shuttles out of Moab, but they all wanted over $350 for the shuttle.  Then we found out that Redtail Aviation, the same people we took a plane tour with back in January, could actually land at a short dirt airstrip right at Mineral Bottom and fly us back to the Green River Airport for just $120.  That sounded like a no-brainer.  Then we also had to rent a canoe, but that was easy…we just picked one up, along with the required paddles, on Thursday.  So, Thursday after work I drove to REI and picked up the canoe and paddles, then I picked Tracy up at work, and we drove to just outside Ruby Ranch, arriving about 10 pm.  We set up the tent and camped.

We got up before dawn, around 5:00, and drove to the put-in at Ruby Ranch.  I dropped Tracy off, along with all our gear, and headed to Mineral Bottom.  I made better time than expected, so I drove into Moab to get some breakfast, and then headed out to Mineral Bottom.  The road down was really steep, but it wasn’t anything too bad.  I was glad it was open, because last year a really bad flood washed out all the switchbacks, and the road was closed for several months.  But they did a great job of getting it back open by spring, and the drive down was no problem.  Once down, I had to find the landing strip…which wasn’t as easy as you might think.  I found it, though, about 5 minutes before the 8 am meeting time, and the plane arrived at 8 am sharp.  From there, they flew me back to Green River, where I met a car shuttle that took me back down to Ruby Ranch for $50, where I met back up with Tracy about 4 hours after I had left her.

It was a full on adventure just to get started on the trip!

As the shuttle driver pulled up, he pointed out that I hadn’t dropped Tracy off at the correct put-in.  Oh well.  It was dark when I dropped her off.  But she had the gear all packed, and we started down the river.  The water was flowing faster than usual as a result of high snow melt, and we were able to float at about 5 mph.  So, for the first day we really didn’t paddle much at all…we really just kind of steered, and let the river do all the work.  One of the biggest things to note from the first day was that the river was bubbling with all kinds of neat mini-whirlpools, presumably from the speed of the water hitting rocks or obstructions at the bottom of the river.  The river would just bubble up all around us, sometimes with loud bubbles, and the water would just swirl around for a few seconds.  We called it the River Monster.  The other interesting thing that happened the first day was that we were dogged all day by the infamous Utah guide book writer, Michael Kelsey.  He was riding around in a powerboat, and we had heard he was updating one of his books.  We also paddled up Ten Mile canyon for a while.  We have hiked around this canyon further up canyon in the past, but it was full of water down by the Green.  We paddled about half a mile up, and it was pretty nice.  There was lots of splashing around the banks as we were moving, and at first we thought it was beavers.  But there were no signs of beavers and we didn’t actually see them.  And it just kept happening…in dozens of places.  And then we figured out what it was: fish…getting it on.  It was weird.  They were everywhere.  It was like we had found the place where fish came to make babies.  We took a short break under a rock overhang and then continued down the Green.  After about 4 hours of paddling, we found a campsite and took it easy the rest of the day, just reading.  I took Edward Abbey’s Desert Solitaire to read, which, even though I think he might have been crazy, was still an excellent book to read while traveling through the area described in his novel.

The next day we got up early to avoid the heat a little and continued down river.  The water flow had slowed down some, so we had to do a little more paddling than the day before, but it still was moving pretty good.  I had planned on stopping at Bowknot Bend to hike up to the saddle separating the river at a tight bend, and, with sheer luck, a good wind storm kicked up just as we arrived at Bowknot.  We pulled off the river just in time to avoid the storm, and I made the hike up to the saddle while the storm moved just north of us.  Bowknot Bend was pretty cool.  On the river, it was nearly 5 miles from either side of the bend…but in a straight line, the two sides of the river were less than half a mile apart with just a low saddle between them.  The hike up the saddle was pretty steep and rocky, but the view was worth it.  After hiking back down, we had lunch and then headed back out, just as the storm finished blowing over.  The rest of the day was uneventful, and we ended up stopping at Horseshoe Canyon.  We have also hiked in this canyon before, further up canyon.  This is the canyon where Aaron Ralston was found after he cut off his arm.  This is also the canyon with one of the best rock art panels in the southwest.  At this point, it was only about 3 pm and we were only about an hour and a half from Mineral Bottom, but I really wanted to camp in Horseshoe Canyon, and I really wanted to stay out for two days.  So we found a campsite a couple of hundred yards up Horseshoe, and just messed around camp and read the rest of the day.

We got up Sunday morning and loaded the canoe to paddle out.  But after trying to start, we realized the water had dropped even more over night, and we actually had to drag the canoe a few yards in the water to get into water deep enough to paddle.  No big deal, though, and we headed back out to the Green.  From there, it was an uneventful hour and a half back to Mineral Bottom, where we found the take out.  We got the canoe and gear loaded up in the truck and just headed back out of the canyon.  The drive back home was a little unnerving because the wind was howling the whole way, which kept me worried that the canoe would fly off.  But nothing bad happened, and we dropped the canoe off at REI before heading on home.

This was a really fun trip.  With the water flow as high as it was, we didn’t have to work very hard for the 45 mile paddle.  We definitely paddled more on the last day than we had any of the other days, but Friday was very easy, and Saturday wasn’t too bad, so all in all, it was a very easy trip.  We saw virtually no people the whole weekend, so that was great.  It got hot in the afternoon, but the nights were comfortable, so it wasn’t too bad.  I’m not sure we would ever want to do this trip again, but I would be willing to do it again.  I definitely remember now that I enjoy sea kayaks more than canoes.  I thought about sea kayaks for this trip, but I just thought that would be overkill.  Plus, I had a shiny new Boundary Pack that I wanted to try out, and it wouldn’t have fit inside a kayak!  The logistics for this trip were tough, but I guess that’s true for any river trip. 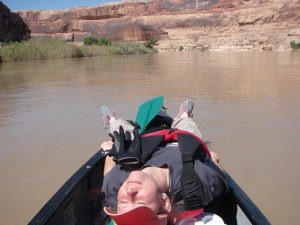 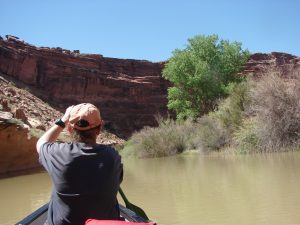 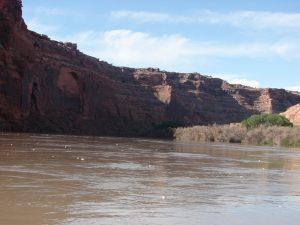 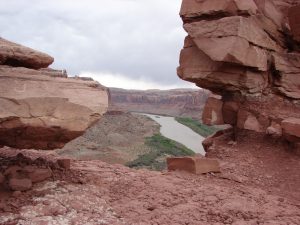 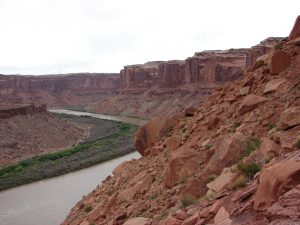 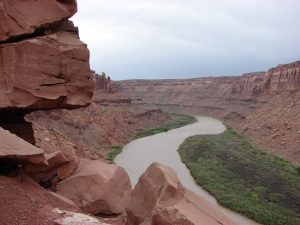 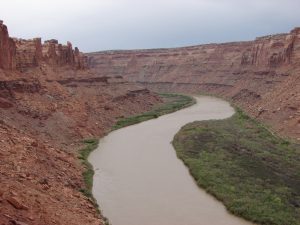 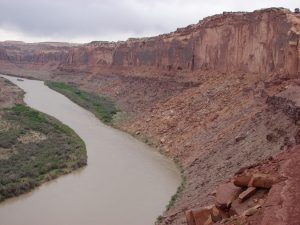 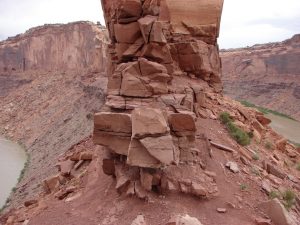 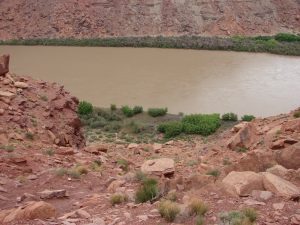 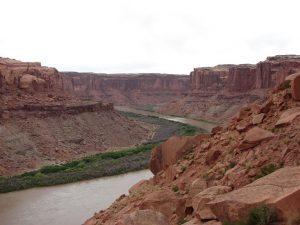 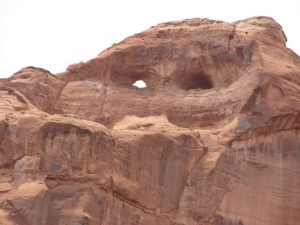 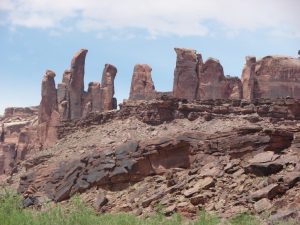 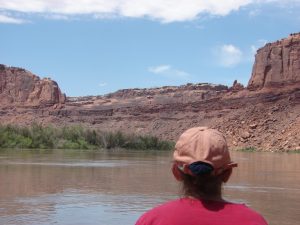 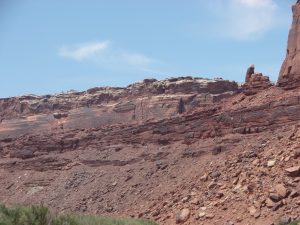 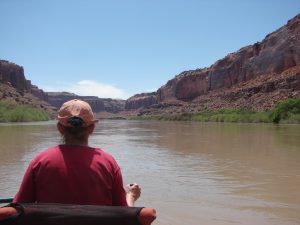 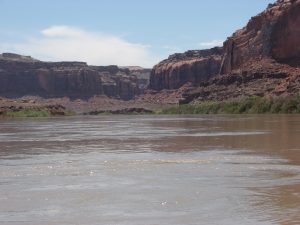 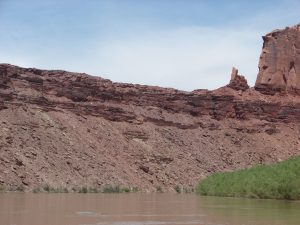 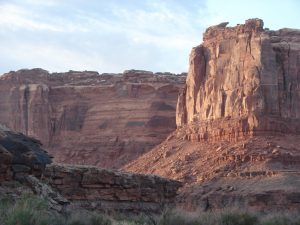 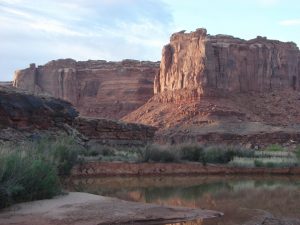 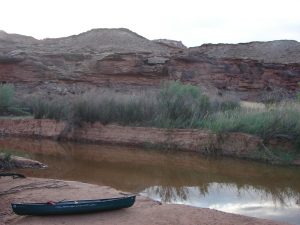 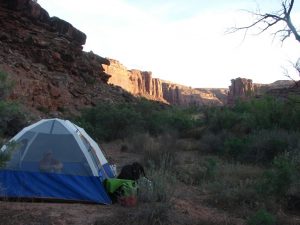