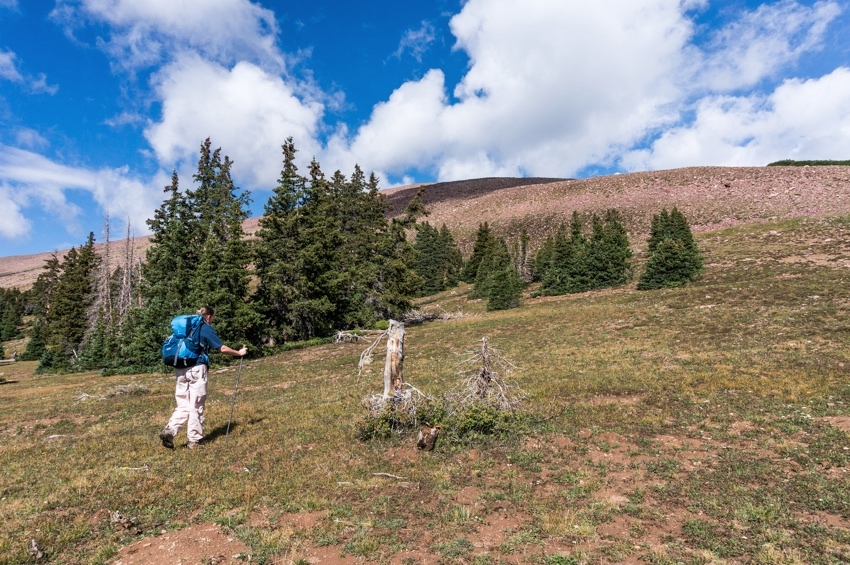 The weekend of 23 Aug 13, Tracy and I took a trip to Leidy Peak in the eastern Uintas.  We left Friday after work and stayed in Vernal.  On Saturday we got up and headed into the mountains, expecting to backpack over Gabbro Pass.  We had tried a couple of times before to head up to the Pass, but we had always hit snow on the back side of Leidy Peak that kept us from making it.  This time I wanted to try later in the summer so that hopefully there would not be any snow.  Unfortunately, the forecast for the day and night called for lots of rain. Not really feeling like dealing with the weather, we unpacked our backpacks and headed out for a dayhike.

Once around the back side of Leidy, we found that the snow field we usually ran into was gone, so that was good.  Somehow, Tracy still climbed high above the trail, and managed to hike above where the snowfield usually was, anyway.  We continued towards Gabbro Pass, climbing down on a small plateau below the pass.  On the way down, Tracy fell and broke another one of my hiking poles, but luckily she wasn’t hurt.  We got to just above Lake Wilde, where we were able to see up the Pass.  What we saw was snow.  It looked like there was a snowfield completely blocking the route up to the Pass.  We could probably have found a way around it, but as we were contemplating it, the wind picked up and it looked like a storm was coming over the pass.  That settled it.

So we decided to make a circle, and dropped down into Lakeshore Basin on the South Fork Ashley Creek.  This trail was really nice, running along the base of the plateau surrounding Leidy Peak.  The trail was very flat and very pretty with several large meadows and lakes.  We had looked over this basin several times from the plateau, and it was nice to get down into it. Once we reached the trail that cut back up to the trailhead, we turned left and began a steep ascent back on to the plateau.  The climb was steep, and the trail was very narrow, but it wasn’t too long.  Soon we made it to another large meadow and had to search for the trail, but then had no problems making it back up to Leidy Peak and back to the car.  We planned to car camp, but ended up driving back into Vernal for the night.  The next day we drove south of Vernal, exploring around the White River down Highway 45.

I really love Leidy Peak.  The area is unique for the Uintas, and it’s very pretty and very uncrowded.  Lakeshore Basin was also really pretty.  All in all, this is a great hike. 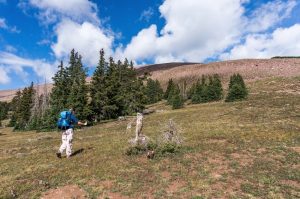 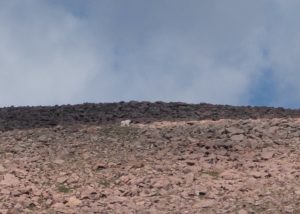 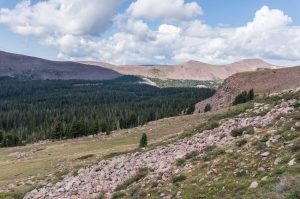 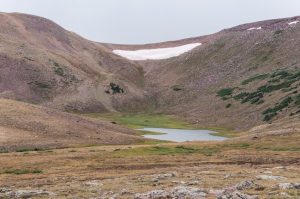 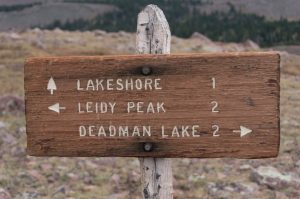 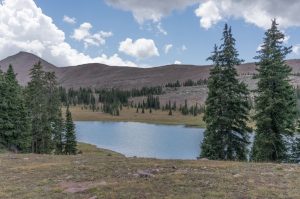 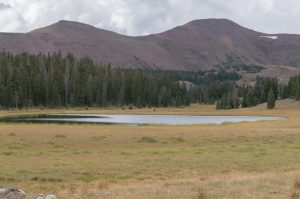 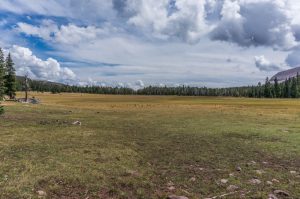