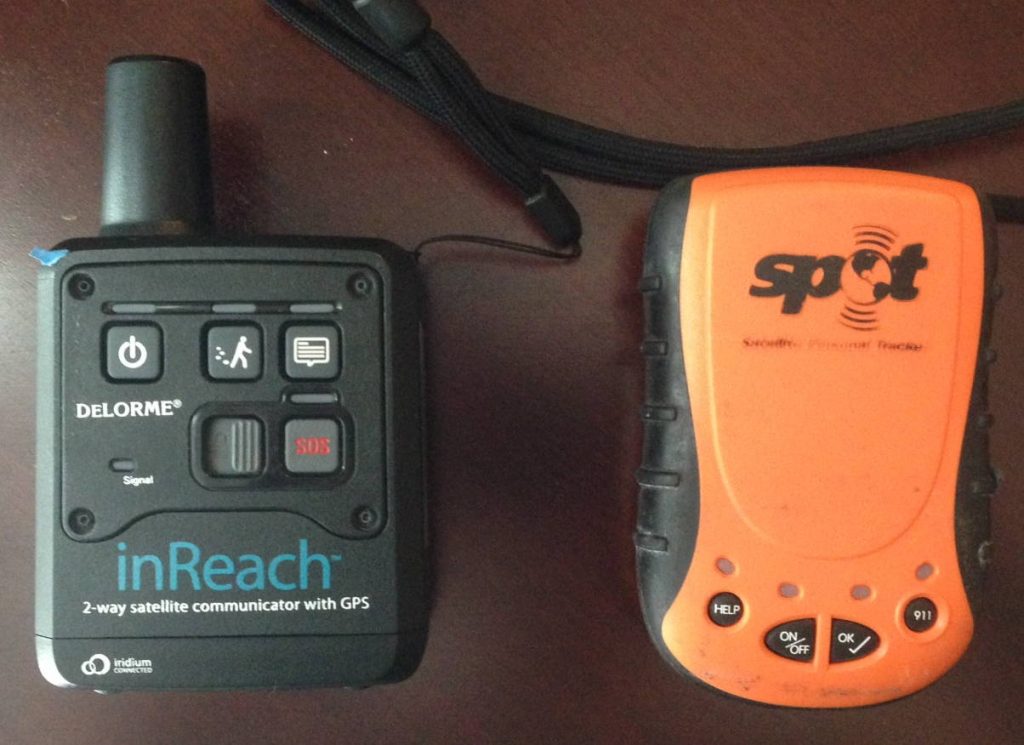 Personally, I have found myself on both sides of the debate. I certainly believe that people venturing into the wilderness should be self-sufficient and capable of taking care of themselves. But I also believe that a philosophical opinion is rarely a good reason to die, especially when it’s someone else’s life. When I got my first cell phone I refused to carry it into the backcountry because I felt like it was a cord that connected me to the real world and I wanted to escape the real world when I hit the trail. Besides, there was rarely a cell signal, so it didn’t matter, anyway.

Then I went on my first backcountry trip to Alaska. We were gone for two weeks and I was genuinely worried that something bad would happen and we would never be seen or heard from again. Alaska has a lot of different risks than most places in the lower 48, so I felt like it would be wise to have some sort of communication device in the event we ran into some really bad problem. So I rented a satellite phone. We didn’t have any emergencies on the trip, but it was nice knowing that we had a way to reach out to the world if something bad happened. The peace of mind it gave me made the trip a little less stressful. I couldn’t afford a satellite phone for my regular trips in the Rockies, though.

Then I got to thinking about one of the basic safety rules: always tell someone where you’re going. I always tried to do this, but I realized there were a lot of times that I ended up going somewhere different than where I had planned to go. Maybe I passed a trail on the way that looked interesting. Maybe I got to my planned trailhead and there were too many people or the trail was a muddy mess. There were many reasons why I might change my trail, and the last thing in the world I wanted was to be forced to go to a trail I had picked while sitting on my couch just because I had told someone that was the trail I was going to hike.

But there’s rarely cell coverage near trailheads, so there was no way to tell someone that I had changed my hiking plans. That meant I either had to hike a trail I didn’t want to hike just because I had told someone that was the trail I was going to hike, or I would have to risk breaking the safety rule and hiking at a different trail. The fact is, if you don’t tell someone where you’re going, then a small injury can prove fatal, especially if you’re solo. And this thought led me to thinking about Aron Ralston and his fiasco down in Bluejohn Canyon in Utah. After reading his book, I completely believe that he was on a collision course for a major accident based on the types of activities he did and the way he did them. However, many people complained that the only reason he was forced to cut off his arm was because he hadn’t told anyone where he was going. If you read his book you realize that he was running around the desert of southern Utah just doing whatever sounded fun that day. Anyone who has played around San Rafael Desert and the Robber’s Roost area knows there is no cell coverage for several hours in any direction. How could he tell someone where he was hiking that day?

So what was Ralston supposed to do? Stick to a regimented plan that he had coordinated with someone else? How many of us would really do that on a trip to an area with dozens of fun slot canyons and lots of time to explore them? I totally agree that if Ralston had told someone where he was then he would likely still have both arms. But I can’t fault him for doing something we all either do or wish we could do: just going where the fancy strikes.

So after thinking about all of these things, I realized that there was only one reliable way to tell someone where I was going while at the same time going wherever I felt like going once I was in the backcountry: satellite communicators.

Soon after returning from Alaska I bought a Spot Messenger. At the time, this was the only affordable option for a backcountry satellite communicator. It was bulky, heavy, and short on capabilities, but it worked.

I used it for three major scenarios: For the first two scenarios, the Spot Messenger allowed me to hike where I wanted to hike, while ensuring that someone back home would receive a text message with GPS coordinates telling them where I was hiking. In the event that something bad happened and I was unable to send an emergency message, they would at least know where to find my body, if nothing else. Or if I got into trouble deep into a canyon where the device didn’t work, then someone would know where I started hiking.

The third scenario is the one where I tend to agree with people who don’t like satellite communicators. One reason people don’t like them is because they worry that people will use them as a substitute for good sense and will press the 911 button just because they’re tired, didn’t prepare well for the trip, or ran out of candy bars. The devices could be used as a crutch by people who shouldn’t be in the backcountry in the first place, and I completely agree that they should not be used that way.

As an example, a few years ago my wife and I were backpacking in New Zealand. While making a steep descent in Mount Cook National Park, my wife slipped and broke her ankle. We were 2 miles and 2500 vertical feet above the trailhead at the time, putting us in a precarious position. The first people to reach us were helpful, and I noticed one of them nervously eye his Spot Messenger clipped on the outside of his pack. I told him not to worry because I had my own Spot, but we would be trying to get her down off the mountain before we resorted to asking for help. He said he was relieved because his family back home would have been very worried if he had sent out an emergency signal. We got her ankle taped up, another group carried her pack down the mountain, and we took four hours to slowly descend the mountain. When we arrived at the hospital, the doctor told us that people usually call for a helicopter when things like that happen.

Of course, it’s important to maintain self-rescue capabilities because the satellite communicators are still an electronic device and they could always fail. You’ve got to be sure you keep spare batteries in case your batteries die. You’ve got to be sure you have a view of the sky or else the device can’t connect to the satellites. Keep this in mind if you’re going into a canyon, a narrow valley, or a forest with a thick canopy. Leaving your first aid kit at home because you carry a satellite communicator is just asking for problems. Keep the limitations in mind and prepare for them, and you can mitigate the risks of failure of the device.

If users will handle the satellite communicators responsibly, then they can be a great lifesaving tool. No one should use them to have fried chicken delivered because he’s hungry, but no one should let his spouse, child, or friend die in the backcountry just because he has a philosophical difference with fancy new electronic gadgetry.

The fact is, a compass was once a fancy new gadget, but eventually it was embraced as a great safety tool. A satellite communicator used responsibly can play a similar role in your backcountry emergency equipment.